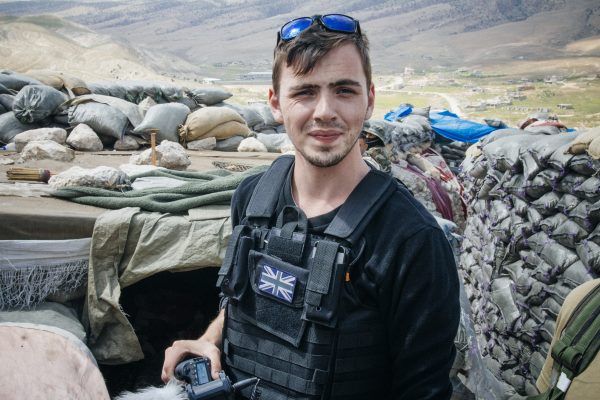 Fresh from releasing the Sun Ladies at the Sundance Film Festival – a VR experience detailing the lives of female Kurdish fighters against ISIS  – filmmaker Christian Stephen will discuss the role of emerging technologies in reaching a global audience. Part film maker and part technologist, Stephen has traveled the world documenting the lives of fighters and civilians on the front lines in Iraq, Syria, Somalia and more. He is a pioneer in virtual reality and drone footage in film-making. His work is devoted to using new methods to bring people closer to understanding conflict and those caught in the crossfire.

Starting his career covering riots in the West Bank at age 16, Christian has spent the majority of the last half decade working in the realm of disaster, political upheaval and war. In 2016, he was the youngest ever nominee for the Livingston Award for International Reporting. The Livingston Awards for Young Journalists are the most prestigious honor for professional journalists under the age of 35 and the largest all-media, general reporting prizes in journalism.

In 2013, at age 18, Christian directed, shot, produced, and edited “The Vicar of Baghdad”, Vice’s award-winning feature-length documentary about life in the Red Zone. His investigative reporting and research into child abuse throughout Afghanistan was a prominent part of evidence that resulted in an independent assembly of the United Nations, A full Defense Department investigation, and a bill introduced in the United States Congress for immediate review and intervention. He was 19 at the time of publication.

In 2015, he traveled to Aleppo, Syria to capture the world’s first ever virtual reality footage within a war zone. Following the viral success of the film, Christian covered earthquake-wracked Nepal for former British Prime Minister Gordon Brown’s TheirWorld charity. The resulting film “Safe Schools: Nepal” caused a global call to action leading to the United Nations pledging to create a fund for education in disaster and conflict.

In 2018, Stephen Co-Directed and Produced “The Sun Ladies” Virtual Reality that was selected for the Sundance Film Festival, Cannes International Film Festival, and South By Southwest (SXSW). “The Sun Ladies” tells the story of escaped ISIS sex slaves who created their own military unit to fight ISIS and free their sisters remaining in captivity.

Stephen will be speaking with Davey Gibian, an entrepreneur and senior government adviser, who spent years working on the ground in global hotspots. The two will discuss the role of technology in public diplomacy in the age of fake news.

Attendees will have a chance to experience and interact with Christian’s virtual reality films before the discussion as we will have VR sets on site.

This event is in collaboration with the Arthur L. Carter Journalism Institute, New York University.