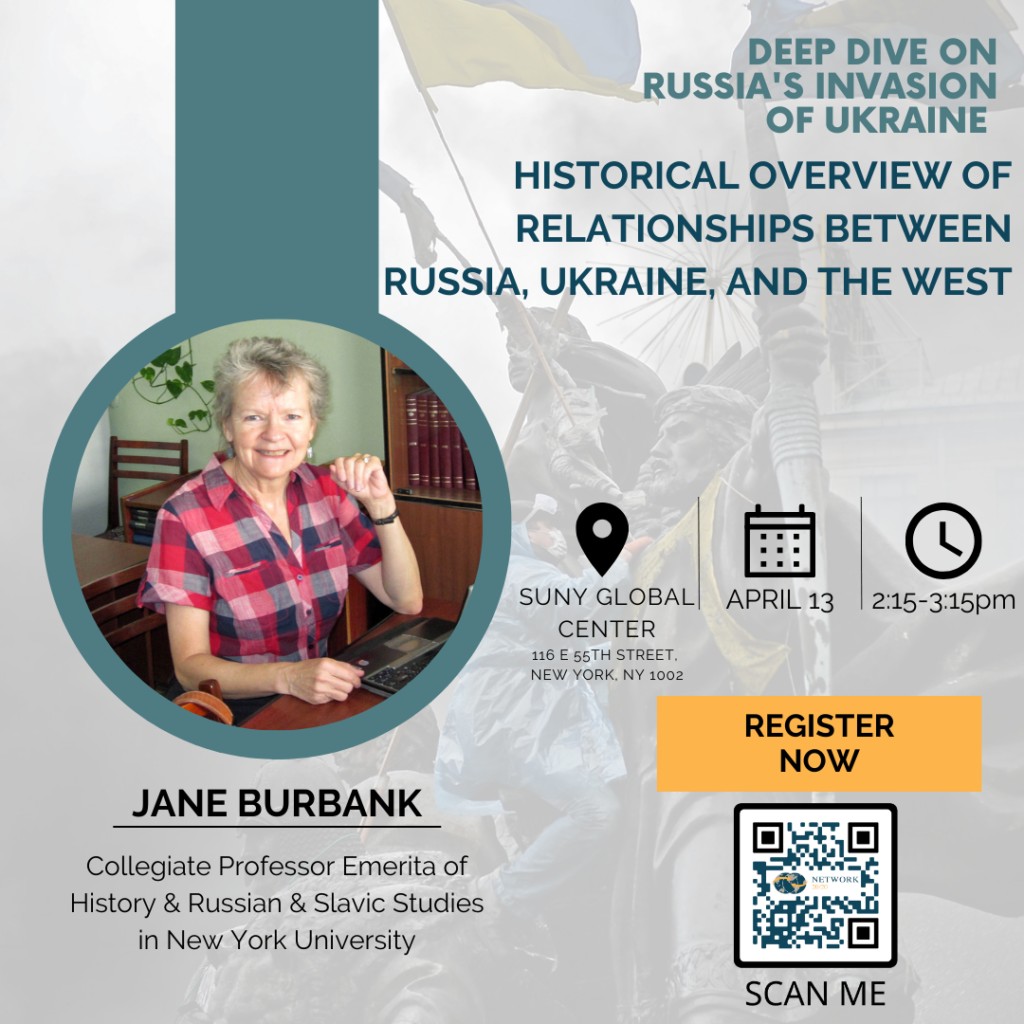 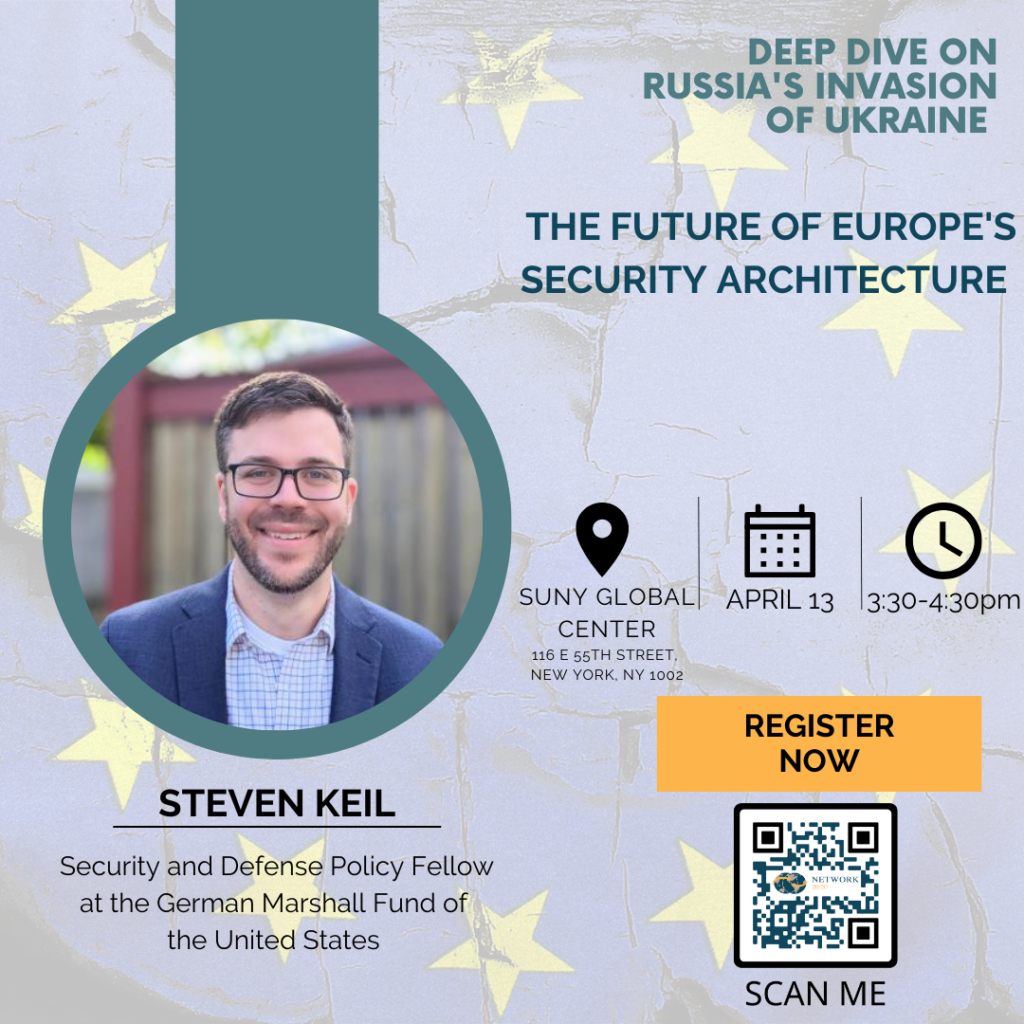 Steven Keil leads GMF’s security and defense portfolio in the Washington, DC office. Keil’s specific area of expertise focuses on transatlantic security, with an emphasis on the U.S., Russia, Germany, and NATO. Prior to joining GMF, Keil was a Robert Bosch Fellow at the CDU/CSU Foreign Policy Working Group in the German Bundestag, as well as in the Eastern European and Eurasian research division at the German Institute for International and Security affairs. Keil also previously worked as a legislative staff member in the United States Senate.
Keil has an extensive analytical track record at the intersection of U.S. national security, regional European security, and Russian foreign policy. He has advised and briefed numerous policymakers on both sides of the Atlantic, and his work has been featured in outlets like Defense One, Defense News, the National Interest, The Hill, and Just Security, among others.
Keil received his bachelor’s from the University of South Dakota in political science, German, and history and holds a master’s degree from Georgetown University’s School of Foreign Service BMW Center of German and European Studies. He speaks German and basic Russian. 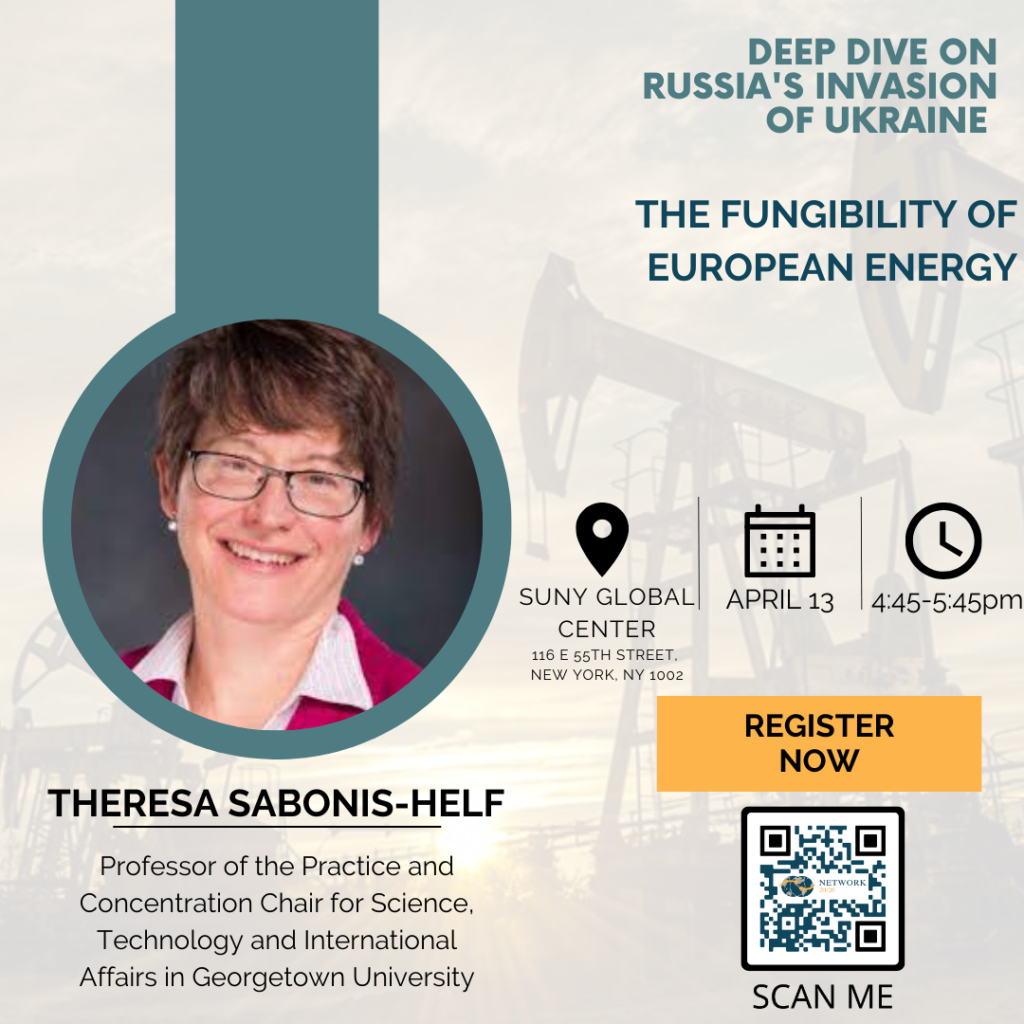 Theresa Sabonis-Helf is the Inaugural Chair of the Science, Technology and International Affairs concentration in the Master’s Degree program at Georgetown University’s School of Foreign Service. Prior to joining Georgetown, she was a Professor of National Security Strategy at the National War College in Washington DC. She has lived and worked in seven countries of the Former USSR, has assisted two nations with the development of their first National Security Strategies, and has co-edited two volumes on Central Asia’s political and economic transition. She has also published and lectured extensively on energy security, climate change policies, post-Soviet energy and environmental issues, regional water politics, regional trade and transit, and the politics of electricity. She is a frequent advisor to the US Department of State and USAID and is also a member of the Council on Foreign Relations. She holds an MPA in International Relations from Princeton University and a PhD in Political Science from Emory University. She teaches MSFS 505: Science Policy Matters (the gateway course for MSFS-STIA concentrators); STIA 318: Energy and International Security, STIA 419: Energy & Environment in Eurasia; and directs STIA 305: Science & Tech in the Global Arena (the team-taught gateway course for undergraduate STIA) 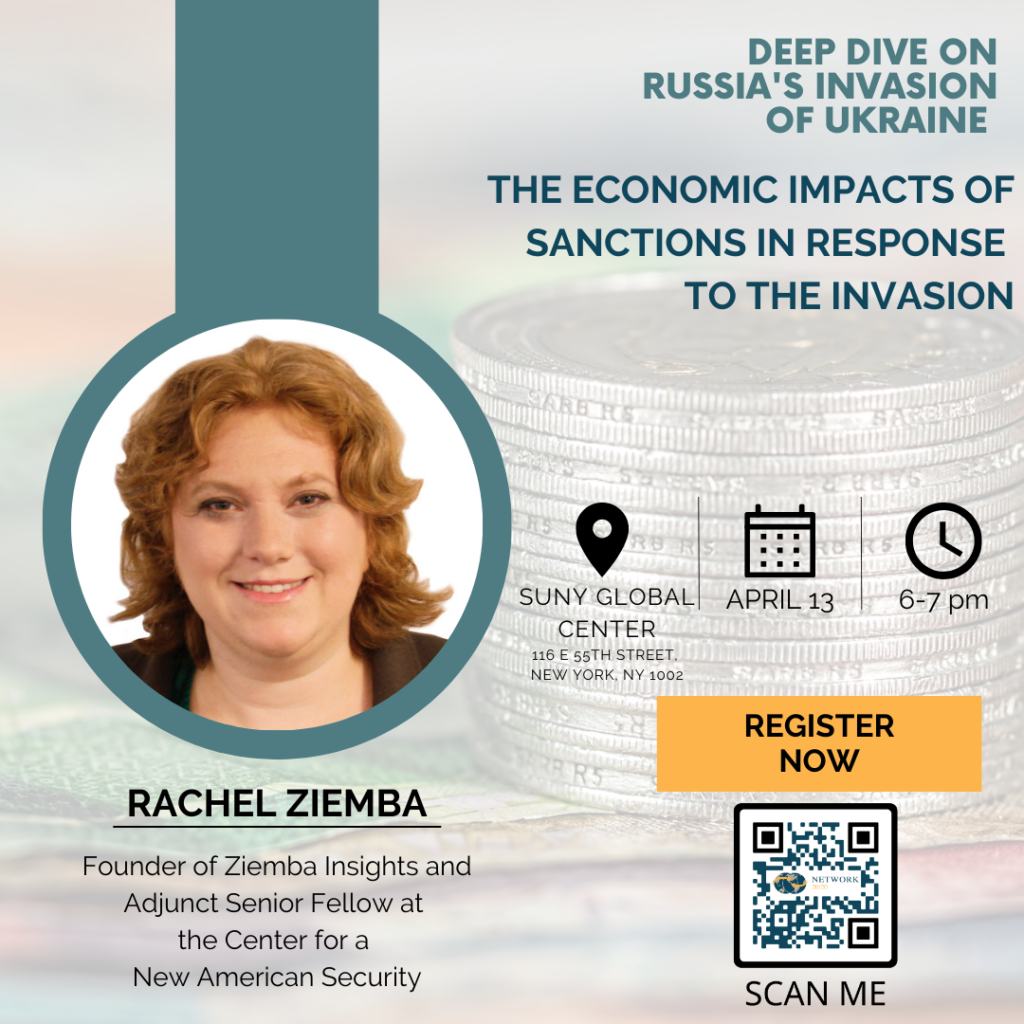 Rachel Ziemba is a geo-economic and country risk expert. She runs Ziemba Insights, an advisory firm that engages in macroeconomic scenario analysis and policy due diligence for public and private sector clients. She is particularly focused on the role of coercive economic policies such as sanctions, the energy transition and the role of state-owned investors including sovereign wealth funds, but also tracks a wide range of global macroeconomic and commodity issues including trade, global imbalances and sovereign debt.
She is also Adjunct Senior Fellow at the Center for a New American Security (CNAS). She is also on the advisory board of Enquire.ai, the Harriman Foreign Service Fellows and the Middle East Energy and Growth program at the Middle East Institute. She is contributor to EM Views and a non-resident fellow at the Gulf International Forum. She previously was an Adjunct Lecturer at New York University’s Center for Global Affairs, teaching international political economy. Before founding Ziemba Insights, Rachel served as the head of emerging markets research at Roubini Global Economics, a global macro strategy and country risk firm. In that capacity she co-led the research team, overseeing the firm’s quarterly global economic outlook and scenario production and implementing many of its customized research projects and due diligence exercises for private equity firms. The work leveraged the firm’s systematic country risk model, global economic forecasting model and a variety of financial tools to generate actionable ideas. Rachel regularly serves as an expert commentator in key media outlets including CNBC, Bloomberg, New York Times, Financial Times, and her research has been cited by a range of international institutions including the International Monetary Fund, World Bank and European Central Bank as well as many academic Institutions. She has served on a range of task forces aimed to generate policy ideas on Egypt, Middle East policy and economic sanctions. She is the co-author of “Scenarios for Risk Management and Global Investment Strategies” and “Investing in the Modern Age” both with William Ziemba. Rachel started her career in international development, working for the Canadian International Development Agency in Egypt, and the International Development Research Centre (Canada) on development economic issues. She also spent time as a US State Department intern at the Embassy in Paris (where she was an inaugural recipient of the Pamela Harriman Foreign Service Fellowship) and the Consulate in Toronto. She holds a bachelor’s degree from the University of Chicago with honors, and a Master of Philosophy degree in international relations with a specialization in international political economy from St. Antony’s College, Oxford University (with distinction). She also serves on the Board of the Heart and Soul Charitable Fund, a charity that supports NYC community programs. 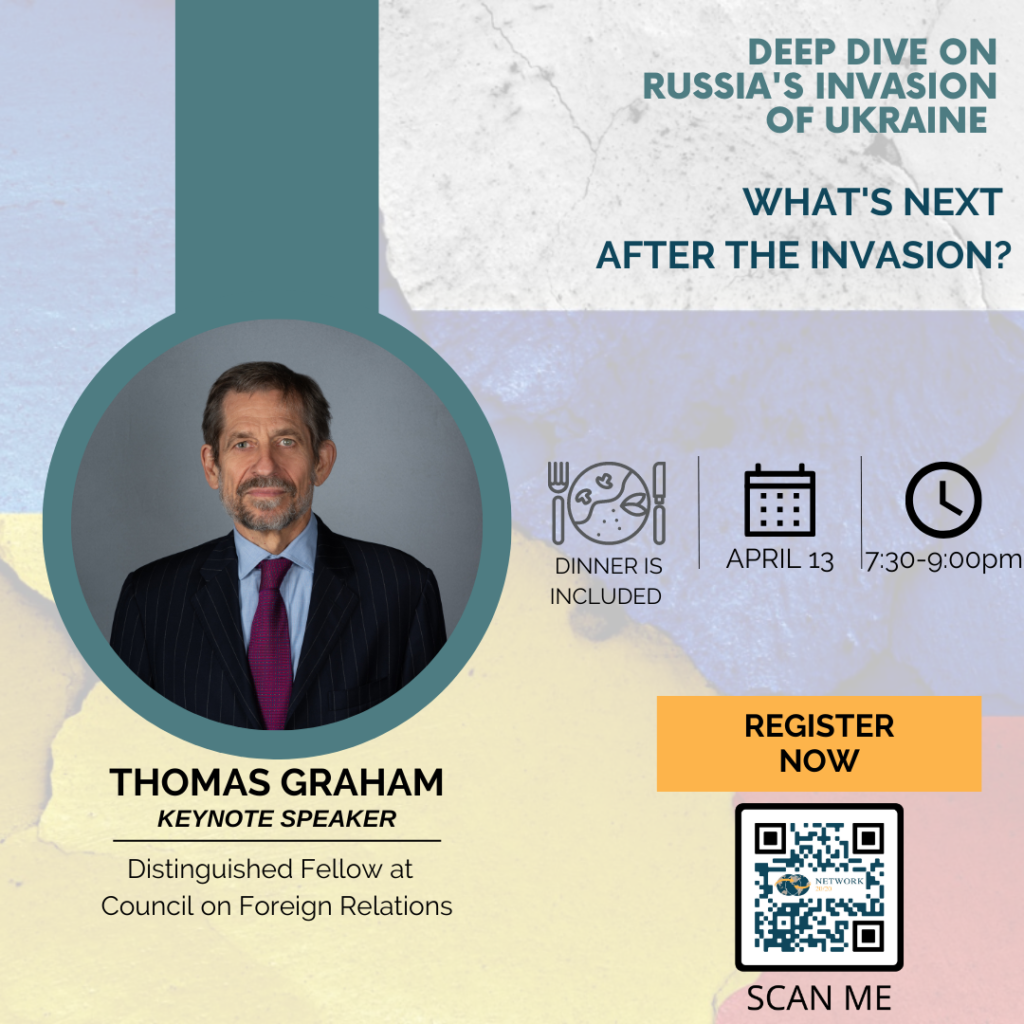 Thomas E. Graham is a distinguished fellow at the Council on Foreign Relations. He is a cofounder of the Russian, East European, and Eurasian studies program at Yale University and sits on its faculty steering committee. He is also a research fellow at the MacMillan Center at Yale. He has been a lecturer in global affairs and political science since 2011, teaching courses on U.S.-Russian relations and Russian foreign policy, as well as cybersecurity and counterterrorism. Graham was special assistant to the president and senior director for Russia on the National Security Council staff from 2004 to 2007, during which he managed a White House-Kremlin strategic dialogue. He was director for Russian affairs on the staff from 2002 to 2004.

Graham served as an advisor to Kissinger Associates from 2008 to 2021. He was a Foreign Service officer for fourteen years. His assignments included two tours of duty at the U.S. Embassy in Moscow in the late Soviet period and in the middle of the 1990’s during which he served as head of the political internal unit and acting political counselor. Between tours in Moscow, he worked on Russian and Soviet affairs on the policy planning staff at the U.S. Department of State and as a policy assistant in the office of the under secretary of defense for policy.