Election interference, infrastructure attacks, and public and private sector data theft are all critical national security threats that governments worldwide need to be prepared to battle. It is clear that cyber conflict is a pressing concern in the twenty-first century, but it is less clear how states can effectively respond to these threats and how prepared they are. Join us for a panel discussion about international cyber conflict featuring Ambassador Milica Pejanović-Đurišić, Major General (Ret) Brett Williams, and Jason Healey, moderated by Thomas Yohannan, on Monday, May 18, from 12 PM to 1 PM ET. 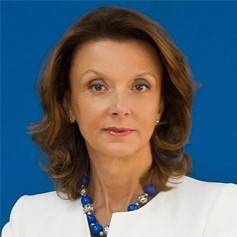 Ambassador Pejanović-Đurišić is the Permanent Representative of Montenegro to UN, as of May 2018. Before, she served as Minister of Defense in the Government of Montenegro from March 2012 to November 2016. Her current engagements also include participation in the Mediterranean Women Mediators network and steering committees of a number of (cyber)security related conferences and initiatives. She is a member of the Governance Board of the Atlantic Council of Montenegro and founder of its Digital Forensic lab.
With a PhD in Telecommunication Engineering, Prof. Pejanović-Đurišić continuously pursues her academic carrier, being full professor in Telecommunications and Wireless Communications at the Faculty of Electrical Engineering, University of Montenegro, founder and director of its Research Centre for ICT. Prof. Pejanović-Đurišić ‘s role in fostering digital transformation of Montenegro and the region has been widely recognized, through a number of initiatives focusing on development and deployment of info-communication infrastructures and applications. Her industry experience includes being President of the Board of “Telekom Montenegro” (1999-2002), as well as President of the Board of the first Montenegrin Internet provider (2001-2002). Prof. Pejanović-Đurišić has been working as a consultant in the field of ICTs, being also engaged as an expert for European Commission, ITU and participating in a number of global professional associations and projects in the field of info-communication technologies. 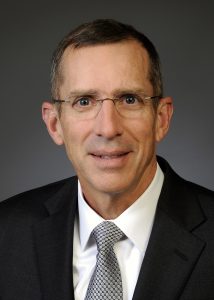 Brett Williams is a co-founder and the Chief Operating Officer at IronNet Cybersecurity.  IronNet delivers the power of collective cybersecurity to defend companies, sectors and nations.  Their advanced cyber detection solution leverages behavioral analytics, artificial intelligence and machine learning to protect against the most advanced threats.  As COO, Brett supports strategic planning, business performance management, leader development and thought leadership in support of marketing and sales.

During his time as an Air Force General Officer, Brett served in four senior executive leadership positions.  As the Director of Operations (J3) at U.S. Cyber Command, he led a team of 400 people responsible for the global operations and defense of all DOD networks as well as the planning and execution of authorized offensive operations.  Prior to this position, he served as Director of Operations (A3O), U.S. Air Force, where he led the largest Air Staff directorate consisting of more than 1300 Airmen and civilians stationed world-wide.  In this role, he developed and justified the operations component of the annual $120B Air Force budget. General Williams also served as the Director of Communications (J6) for U.S. Pacific Command. His 150-person directorate executed an annual budget of $57M and was responsible for the design, implementation and operation of all command and control networks supporting DOD’s largest geographic warfighting command.  Finally, as the Inspector General for Air Combat Command, he led the inspection, audit and compliance process for all U.S based combat flying organizations.

Operationally, General Williams led a variety of large, complex organizations ranging in size from 300 to over 9000 personnel.  In his most significant leadership position as 18th Wing Commander in Okinawa, Japan, he led the largest combat wing in the Air Force. General Williams was responsible for relationships with Japanese political and business leaders in a highly volatile community environment. He executed an annual budget in excess of $100M to support a community of over 25,000 U.S. service members, their families and Japanese employees.  In this significant leadership role, he delivered success across a wide variety of mission areas to include aircraft operations, aircraft maintenance, logistics, civil engineering, security and policing, community support, human resources, financial management and medical services.  Brett is an F-15C fighter pilot with over 28 years of flying experience, including more than 100 combat missions.

Brett is a highly regarded keynote speaker, leadership coach, and cybersecurity expert.  He has appeared several times on national television, testified before the Senate Armed Services Committee and is a sought-after subject matter expert.  Brett has served as a faculty member with the National Association of Corporate Directors Board Advisory Services as well as a guest professor at Duke University.  He has served on the Defense Science Board and on a variety of corporate advisory boards.  Brett holds a BS in Computer Science from Duke University and three graduate degrees in management and national security studies. 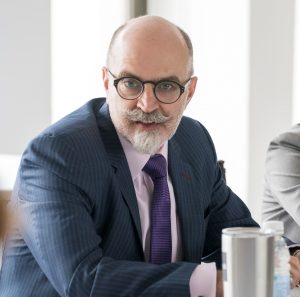 Jason Healey is a Senior Research Scholar at Columbia University’s School for International and Public Affairs specializing in cyber conflict, competition and cooperation. Prior to this, he was the founding director of the Cyber Statecraft Initiative of the Atlantic Council where he remains a Senior Fellow.  He is the editor of the first history of conflict in cyberspace, A Fierce Domain: Cyber Conflict, 1986 to 2012. A frequent speaker on these issues, he is rated as a “top-rated” speaker for the RSA Conference and won the inaugural “Best of Briefing Award” at Black Hat.

He helped the world’s first cyber command in 1998, the Joint Task Force for Computer Network Defense, where he was one of the early pioneers of cyber threat intelligence. During his time in the White House, he was a director for cyber policy, coordinating efforts to secure US cyberspace and critical infrastructure.  He created Goldman Sachs’ first cyber incident response team and later oversaw the bank’s crisis management and business continuity in Asia. He served as the vice chair of the Financial Services Information Sharing and Analysis Center (FS-ISAC).  He is on the review board of the DEF CON and Black Hat hacker conferences and served on the Defense Science Board task force on cyber deterrence. He started his career as a US Air Force intelligence officer with jobs at the Pentagon and National Security Agency and is president of the Cyber Conflict Studies Association.

Thomas Yohannan leads business development for the Digital DNA Group, a digital forensics lab that is part of CyberNYC’s Cyber Startup Radar 2020. He also serves as a Security Advisor to the US-Israel Economic Mission and is a contributing author for Cybercrime & Security (Thomson Reuters, 2020) focusing on cyber insurance.

Thomas combines his experience as a lawyer with his expertise in security, forensics, and cyber insurance to help organizations navigate technological risk and its impact on business. Previously, Thomas focused on strategic security partnerships for Cisco Security. He was also head of channel sales for Cvent and was legal counsel at UBS Investment Bank and Goldman Sachs. He is admitted to the New York bar.

Thomas holds a BA in Philosophy, Politics & Law from Binghamton University with a BA, a JD from the University of Southern California – Gould School of Law and an MBA from New York University – Leonard N. Stern School of Business.