With the Civil War in Yemen recently marking its fifth year of ongoing conflict, many in the region and around the world fear that there is no end in sight. Dubbed one of the worst humanitarian disasters in history, the Civil War has taken the lives of thousands of Yemenis through violence and famine. Now, Yemen is confronting yet another crisis: COVID-19. Experts are voicing their concerns that Yemen’s already poor health and sanitation infrastructure will not be prepared to handle the onslaught of the disease. To further compound this problem, international humanitarian assistance for the country has been reduced, and there is no guarantee that the aid that does reach Yemen will be distributed to those who need it. Despite the seemingly endless nature of the conflict, in a shocking move, Saudi Arabia announced a ceasefire in early April, signaling a possible changing of the tides. It remains to be seen how the war will play out in the coming months, but there is no doubt that COVID-19 will pose an even greater burden on Yemen. Tune in on Monday, May 11 at 12 PM, when we are joined by Helen Lackner for a discussion of Yemen’s evolving situation. 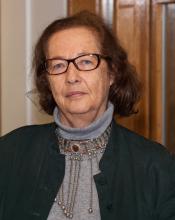 Helen Lackner is a visiting fellow at the European Council on Foreign Relations and a research associate at SOAS, University of London.  She was the 2016 Sir William Luce Fellow at Durham University.

Her latest book is Yemen in Crisis: the road to war published in the US by Verso in 2019.  She has contributed chapters to a number of recent and forthcoming books, on the UN role in Yemen, water issues, Yemeni social structure, and political developments. Self-standing papers include War and Pieces: political divides in southern Yemen, (ECFR 2020, with Raiman al Hamdani),  Yemen’s Peaceful Transition from Autocracy: could it have succeeded? (International IDEA 2016), Understanding the Yemeni Crisis: the transformation of tribal roles in recent decades (Durham, Luce Fellowship Paper 17, 2016). She edited Why Yemen Matters: A Society in Transition (Saqi Books 2014) and other books. She is a regular contributor to Open Democracy, Arab Digest and Oxford Analytica. She also speaks on the Yemen crisis in many public events in Europe and the Middle East.

Her earlier career as a rural development consultant took her to more than 30 countries in the Middle East, Asia, Africa, and Europe where she worked on a wide range of agricultural, community development, and fisheries projects.  In recent years, she has recycled to focus on in-depth analytic work and writing. She now mainly writes about the crisis in Yemen, a country with which she has been involved since the early 1970s and where she lived for more than 15 years between the 1970s and 2010s

COULD NOT ATTEND THE EVENT? Don’t worry. You can watch it below: