Palestinians and a Humanitarian Crisis

As the long-standing Israel-Palestine conflict shifts with geopolitics, Palestinians have faced a dire humanitarian crisis with 2.5 million out of 5.2 million Palestinians in need of humanitarian assistance. Political fragmentation and infighting between Fatah and Hamas also affect those Palestinians living in Gaza and the West Bank, as well as those who are refugees or living in Israel. What is the range of humanitarian concerns among different groups of Palestinians? Are their political options representative of the people? And what does the future look like for Palestinians in such unresolved circumstances? Join us for a discussion on the humanitarian and political circumstances for Palestinians on Monday, June 14 from 12:00 pm to 1:00 pm EDT, when we will be joined by Khaled Elgindy, Senior Fellow and the Director of Program on Palestine and Palestinian-Israeli Affairs at the Middle East Institute.

Senior Fellow, Director of Program on Palestine and Palestinian-Israeli Affairs 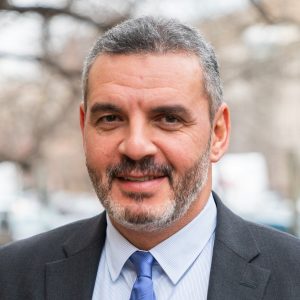 Khaled Elgindy is a senior fellow at the Middle East Institute where he also directs MEI’s Program on Palestine and Israeli-Palestinian Affairs.
He is the author of the newly-released book, Blind Spot: America and the Palestinians, from Balfour to Trump, published by Brookings Institution Press in April 2019. Elgindy previously served as a fellow in the Foreign Policy program at the Brookings Institution from 2010 through 2018. Prior to arriving at Brookings, he served as an adviser to the Palestinian leadership in Ramallah on permanent status negotiations with Israel from 2004 to 2009, and was a key participant in the Annapolis negotiations of 2007-08. Elgindy is also an adjunct instructor in Arab Studies at Georgetown University.
Khaled’s writings have a appeared in wide range of publications, including The Christian Science Monitor, CNN.com, Foreign Affairs, Foreign Policy, The Los Angeles Times, The National Interest, The Washington Quarterly, and others. He is frequently quoted in The New York Times, The Washington Post, The Los Angeles Times, The Hill, Politico, and other print media, and is a regular commentator on TV and radio, including Aljazeera, BBC, CNN, Fox News, MSNBC, NPR, PBS Newshour and others.