Trade, Tariffs, and Post-Trump: The Future of U.S. Policy

Global trade has faced several challenges over the past few years. The COVID-19 pandemic has severely impacted both large and small economies, forcing companies to adapt and overcome the challenges of the lockdowns. Just as the pandemic set in, China and the U.S. signed a phase 1 trade deal to put an end to their tit-for-tat tariff war. With President Biden signaling a renewal of trade negotiations and the urgent need for economic recovery worldwide, what role will trade play? And how will trade factor into the Biden Administration’s China policy? Join us for an in-depth discussion of these issues and more on Monday, January 25th from 12:00 PM to 1:00 PM, when we are joined by Stefan M. Selig, founder of BridgePark Advisors LLC and former Under Secretary of Commerce for International Trade for the Obama Administration. With nearly 30 years of experience on Wall Street and as one of the nation’s most senior commercial officials, Mr. Selig will give his assessment of the future of U.S. trade policy and its broader implications. 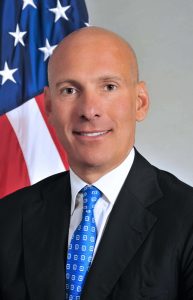 Stefan M. Selig is an accomplished banker and senior executive who has served in prominent leadership roles in both the private and public sectors. During his nearly 30-year Wall Street career, Selig built a reputation as a trusted counselor to his clients, and he is recognized for his experience and judgment in providing strategic and financial advice to leading companies and investors.
In 2017, Selig founded BridgePark Advisors LLC to provide personalized strategic advice on a broad range of critical business and financial issues and transaction execution to a select group of CEOs, boards of directors, and institutional and high net worth investors. BridgePark offers clients exceptional insight and judgment in business strategy and planning, mergers and acquisitions, financing, corporate governance, activism, litigation, and trade and regulatory matters. BridgePark is a true long-term partner for business and government leaders worldwide.
Selig served as President Obama’s Under Secretary of Commerce for International Trade at the U.S. Department of Commerce from 2014-2016. As one of the nation’s most senior commercial diplomats, Selig headed the International Trade Administration, a bureau of 2,200 trade and investment professionals in 75 countries. He was responsible for increasing the competitiveness of U.S. industry, promoting trade and investment, and working with foreign governments to improve the global business environment. He led in the development of U.S. trade policy, created jobs and economic growth by promoting U.S. companies abroad, strengthened American competitiveness across all industries, addressed market access and compliance issues, administered U.S. trade laws, and undertook a range of trade promotion and trade advocacy efforts. Selig also served as the Executive Director of the Travel and Tourism Advisory Board; sat on the board of directors of the Overseas Private Investment Corporation (OPIC), the U.S. government’s development finance institution; was a Commissioner for the Congressional Executive Commission on China, and was the Executive Director of the President’s Advisory Council on Doing Business in Africa.
Before joining the Obama Administration, Selig spent 15 years at Bank of America Merrill Lynch, most recently as the Executive Vice Chairman of Global Corporate & Investment Banking. At BAML, Selig built and maintained critical relationships at the CEO and board level with important clients of the bank. He previously served as Vice Chairman of Global Investment Banking; Global Head of Mergers & Acquisitions with responsibility for Global Technology, Media and Telecommunications and Global Financial Sponsors Groups; Chairman, Fairness Opinion Review Committee, and Member of Risk and Reputation and New York Market Committees.
Prior to joining Bank of America in May 1999, Selig held various senior investment banking positions, including Co-Head of Mergers & Acquisitions for UBS Securities. He began his investment banking career in the Mergers & Acquisitions Group at The First Boston Corporation in 1984, and subsequently was an original member of Wasserstein Perella & Co.
Selig is a graduate of Harvard Business School (MBA), Wesleyan University (B.A., Economics), and the London School of Economics and Political Science (General Course).
Selig currently serves as a board director of a number of public and private companies, including: Simon Property Group (NYSE: SPG), an S&P 100 company and a global leader in the ownership of premier shopping, dining, entertainment, and mixed-use destinations; Entercom Communications Corp. (NYSE: ETM), one of the top two radio broadcasters in the U.S., reaching more than 100 million people weekly via its 235 radio stations and its digital platforms and live events; Safehold Inc. (NYSE: SAFE), which acquires, owns, manages and capitalizes ground net leases (where he is Lead Director); and Drive DeVilibiss Healthcare, a leading manufacturer of medical products controlled by Clayton, Dubilier & Rice. He also serves as a Disinterested Director of certain subsidiaries of Gulfport Energy Corporation (NASDAQ: GPOR). He is a member of the Council on Foreign Relations, The Economic Club of New York, the Bretton Woods Committee and the Atlantic Council Councilors Program.
Selig previously served on the boards of directors of Lincoln Center for the Performing Arts and Services for the UnderServed, which supports individuals and families facing challenging situations.