EU Priorities and Possibilities for Transatlantic Cooperation in UN75 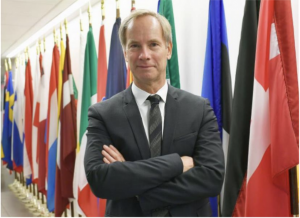 Ambassador Olof Skoog is the Head of the Delegation of the European Union to the United Nations since December 2019. He is a Swedish diplomat with extensive experience from a number of top positions worldwide, representing both Sweden and the European Union.
Ambassador Skoog was most recently the Permanent Representative of Sweden to the United Nations, and in this capacity served as the Chairman of the United Nations Peacebuilding
Commission and President of the UN Security Council. He has previously been DirectorGeneral for Political Affairs in the Swedish Ministry of Foreign Affairs, and has represented Sweden at the European Union and at the Organisation for Security and Cooperation in Europe (OSCE). He has also been Swedish Ambassador to Colombia, Venezuela, Ecuador and Panama and served as Executive Assistant to Dr. Hans Blix in the UN verification of WMD in Iraq.
With the European Union, Ambassador Skoog served as the first Permanent Chair of the EU Political and Security Committee, coordinating the EU Common Foreign and Security Policy. He was then posted as the EU Ambassador to Indonesia and Brunei, also representing the EUto ASEAN.
Ambassador Skoog was born in 1962. He is married to Johanna Brismar, currently Sweden’s Ambassador to Brazil. They have three children.