India is navigating a foreign policy conundrum following its decision to abstain from voting against Russia’s invasion of Ukraine. These new demarcations of loyalties are stirring up crucial considerations and questions about India’s global strategy at a time when it is taking over leadership of the G20 for the year. India’s past policy of nonalignment has been reinvigorated under the Bhartiya Janata Party (BJP), furthering the country’s dilemma of autonomy and engagement. As the world becomes more multipolar, can the world’s largest democracy still follow a strategy of nonalignment? Additionally, how can India’s foreign policy strengthen its strategic orientation regarding China and Pakistan as well as its position in the Indo-Pacific region? What are the domestic drivers shaping India’s regional position? More importantly, how can India’s participation in the Quadrilateral Security Dialogue aid that? Lastly, what do these answers suggest for U.S. strategy in the Indo-Pacific? Join us for a virtual discussion with Ambassador Arun Kumar Singh, Former Indian Ambassador to the United States, Professor Waheguru Pal Sidhu, Clinical Professor and directs the United Nations Specialization at the Center for Global Affairs, School of Professional Studies, New York University, and Dr. Manjari Chatterjee Miller, Senior Fellow for India, Pakistan, and South Asia at the Council on Foreign Relations and Associate Professor of International Relations, and the Director of the Rising Powers Initiative at the Pardee Center at Boston University; from 11 AM to 12:00 PM ET on Thursday, January 26, 2023, to discuss these questions and more. 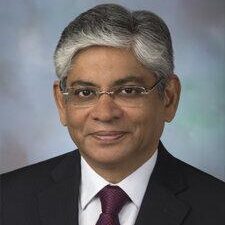 Ambassador Arun K. Singh has extensive experience across the globe, including as India’s Ambassador to the United States, Israel, and France. Throughout his distinguished 37-year career in the Indian Foreign Service, Ambassador Singh has served during pivotal periods in key global capitals, and was instrumental in shaping India’s policies, notably the continued progress in the US-India relationship; India’s closer ties to Israel; and the formulation and implementation of India’s policies related to Afghanistan, Pakistan, and Iran, including in the period following 9/11.

In addition to his ambassadorial postings, Ambassador Singh’s previous assignments include: Embassy of India, Moscow from 1981 to 1982; the Indian Mission in Addis Ababa as Second Secretary from 1982 to 1985; Tokyo as First Secretary from 1985 to 1988; Deputy Secretary/Director dealing with East Asia and Pakistan Divisions from 1988 to 1991; Offices of the Foreign Secretary and the External Affairs Minister of India from 1991 to 1993; Counsellor at the Permanent Mission of India to the United Nations Office, New York from 1993 to 1997; Counsellor/Minister at the Indian Mission at Moscow from 1997 to 2000; and as Joint Secretary dealing first with the United Nations Policy, and then Pakistan, Afghanistan and Iran Divisions at the Ministry of External Affairs from 2000 to 2005.

Ambassador Singh is a Senior Counselor at The Cohen Group, a Distinguished Non-Resident Senior Fellow in the Asia Program at The German Marshall Fund, and a Visiting Professor at Ashoka University (India). He was also a Halle/ GSI Fellow at Emory University (2017- 22) and a Member of India’s National Security Advisory Board (2021-22). In the spring of 2017, Ambassador Singh taught courses on US Foreign Policy in South Asia and Current Global Trends and Challenges at both American University and the School of Advanced International Studies at Johns Hopkins University. He was also a Distinguished Visiting Professor at Center for Advanced Study of India at the University of Pennsylvania.

Ambassador Singh holds a Masters Degree in Economics from Delhi University, where he specialized in econometrics, development policy, macroeconomics, and Indian economic history. Ambassador Singh is based in New Delhi. 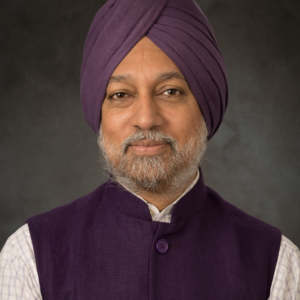 Dr. Waheguru Pal Singh (W.P.S.) Sidhu is Clinical Professor and directs the United Nations (UN) Specialization at the Center for Global Affairs, School of Professional Studies (SPS), New York University. He teaches graduate-level courses on International Relations, the UN & global governance, weapons of mass destruction, and emerging powers & world order. He was bestowed with the SPS Teaching Excellence Award in 2021. Dr. Sidhu has over 30 years of pedagogical and research experience in some of the leading teaching and policy-research institutions in Asia, Europe, and North America. He is also Senior Research Associate, South African Institute of International Affairs, Johannesburg; Associate Fellow, Geneva Center for Security Policy, Switzerland; Member, International Advisory Council of the International Luxembourg Forum on Preventing Nuclear Catastrophe; and Member, Institute for Defence Studies and Analyses, New Delhi. He has also served as a consultant to UN agencies, including three UN Panel of Governmental Experts on Missiles. He is the author of multiple books, chapters, monographs, and reports, and has published in Arms Control Today, International Peacekeeping, Jane’s Intelligence Review, Politique Etrangere, and the Bulletin of Atomic Scientists. His recent publications include Shaping the Emerging World: India and the Multilateral Order (Brookings, 2012) and The Future of Global Affairs: Managing Discontinuity, Disruption and Destruction (Palgrave, 2021). Dr. Sidhu earned his Ph.D. from the University of Cambridge. He holds a Master’s in International Relations from the School of International Studies, Jawaharlal Nehru University, and a Bachelor’s in History (Honours) from St. Stephen’s College, Delhi University, India 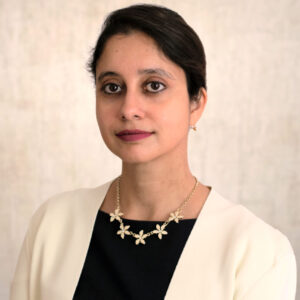 Dr. Manjari Chatterjee Miller is senior fellow for India, Pakistan, and South Asia at the Council on Foreign Relations (CFR). She is also a research associate in the Contemporary South Asian Studies Programme at the Oxford School of Global and Area Studies at the University of Oxford. An expert on India, China, South Asia, and rising powers, she is the author of Why Nations Rise: Narratives and the Path to Great Power (2021, shortlisted for the 2022 Hedley Bull Prize in International Relations) and Wronged by Empire: Post-Imperial Ideology and Foreign Policy in India and China (2013). Miller is also the co-editor of the Routledge Handbook of China-India Relations (2020), a monthly columnist for the Hindustan Times, and a frequent contributor to policy and media outlets in the United States and Asia.

Miller is currently on leave from the Frederick S. Pardee School of Global Studies at Boston University where she is a tenured associate professor of international relations, and the director of the Rising Powers Initiative at the Pardee Center. She has been a non-resident fellow at the Atlantic Council, a fellow at the Belfer Center of Science and International Affairs at Harvard University, a visiting associate professor at the Lee Kuan Yew School of Public Policy at the National University of Singapore, and a visiting scholar at the Chinese Academy of Social Sciences and the Crawford School of Public Policy at Australian National University. She has published numerous articles in peer-reviewed and policy journals, and chapters in edited books. She serves on the international advisory board of Chatham House’s International Affairs journal, and her research has been supported by grants and fellowships from multiple institutions. Miller received a BA from the University of Delhi, an MSc from the University of London, and a PhD from Harvard University. She was a post-doctoral fellow in the China and the World Program at Princeton University.