Russian spies and covert intelligence missions seem like tools of the bygone era of the Cold War, but in reality, Russia continues to employ similar policies and techniques to this day. As made clear by recent cyber hacks and interference in the 2020 presidential election, Russian intelligence actions have far-reaching impacts on U.S. national security and present even greater challenges in today’s cyber-dominated world. What impact will Russian intelligence efforts have on the United States in the future, and how can we prepare ourselves against vulnerabilities? Join us on Thursday, April 15, from 12 PM to 1 PM ET, when we speak with Jack Devine, 32-year veteran of the CIA and President of The Arkin Group LLC, about U.S.-Russia relations, his new book Spymaster’s Prism: The Fight Against Russian Aggression, and more. 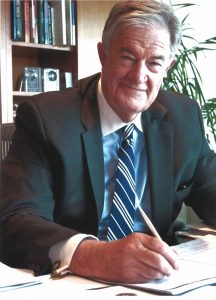 Jack Devine is a founding partner and President of The Arkin Group LLC, which specializes in international crisis management, strategic intelligence, investigative research and business problem solving. He is a 32-year veteran of the Central Intelligence Agency (“CIA”). Mr. Devine served as both Acting Director and Associate Director of CIA’s operations outside the United States from 1993-1995, where he had supervisory authority over thousands of CIA employees involved in sensitive missions throughout the world. In addition, he served as Chief of the Latin American Division from 1992-1993 and was the principal manager of the CIA’s sensitive projects in Latin America.
Between 1990 and 1992, Mr. Devine headed the CIA’s Counternarcotics Center, which was responsible for coordinating and building close cooperation between all major U.S. and foreign law enforcement agencies in tracking worldwide narcotics and crime organizations. From 1985-1987, Mr. Devine headed the CIA’s Afghan Task Force, which successfully countered Soviet aggression in the region. In 1987, he was awarded the CIA’s Meritorious Officer Award for this accomplishment.
Mr. Devine’s international experience with the U.S. government included postings to Latin America and Europe. During his more than 30 years with the CIA, Mr. Devine was involved in organizing, planning and executing countless sensitive projects in virtually all areas of intelligence, including analysis, operations, technology and management.
He is the recipient of the Agency’s Distinguished Intelligence Medal and several meritorious awards. He is a recognized expert in Intelligence matters and has written Op-Ed articles for The Washington Post, The Wall Street Journal, The Financial Times, Foreign Affair Magazine, The World Policy Journal and Politico. He has also made guest appearances on National Press Club, CNN, CBS, NBC, MSNBC, Fox News, CSPAN as well as the History and Discovery channels, PBS, NPR and ABC Radio.
Mr. Devine resides in New York City and is a member of the Council on Foreign Relations. He speaks Spanish and Italian.
Mr. Devine’s book, “Good Hunting! A Spymaster’s Story” was published in June 2014. It focuses on his Agency career and the role of Covert Action in the past and the future. He is represented by Leading Authorities for all speaking engagements.

About Spymaster’s Prism: The Fight against Russian Aggression: 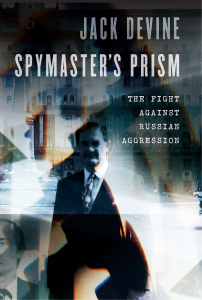 In SPYMASTER’S PRISM (March 1, 2021; Potomac Books/University of Nebraska Press; hardcover; ISBN 978-1-64012-378-6; $34.95; 304 pages) the legendary former spymaster Jack Devine details the unending struggle with Russia and its intelligence agencies as it works against our national security. Devine tells this story through the unique perspective of a seasoned CIA professional who served more than three decades, some at the highest levels of the agency. He uses his gimlet eyed view to walk us through the fascinating spy cases and covert action activities of Russia, not only through the Cold War past but up to and including its interference in the Trump era. Devine also looks over the horizon to see what lies ahead in this struggle and provides prescriptions for the future.

Based on personal experience and exhaustive research, Devine builds a vivid and complex mosaic that illustrates how Russia’s intelligence activities have continued uninterrupted throughout modern history, using fundamentally identical policies and techniques to undermine our democracy. He shows in stark terms how intelligence has been modernized and weaponized through the power of the cyber world.

Devine presents his analysis using clear eyed vision and a repertoire of better than fiction spy stories, giving us an objective, riveting, and candid take on U.S. Russia relations. He offers key lessons from our intelligence successes and failures over the past seventy five years that will help us determine how to address our current strategic shortfall, emerge ahead of the Russians, and be prepared for what’s to come from any adversary.

“Devine’s highly readable style and insider experience in intelligence make this must read study a persuasive warning to implement the measures he suggests to thwart this threat to our national security.”
—Michael Sulick, former director of the U.S. National Clandestine Service

“SPYMASTER’S PRISM is a must read, and the title says it all. The Cold War is not over. The actors may have changed, but the goal remains the same. Jack Devine is a real spymaster, beginning his career as a young CIA operations officer who rose to the highest ranks of the CIA. This book belongs on everyone’s shelf.”
—Sandra Grimes, CIA Russian operations specialist and coauthor of Circle of Treason: CIA Traitor Aldrich Ames and the Men He Betrayed