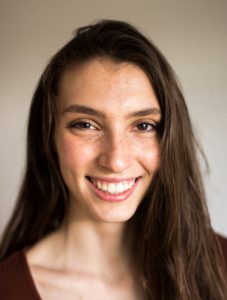 Sienna Ross is the Program and Communications Intern at Network 20/20. Raised in Singapore, Brazil, and Oregon, Sienna’s diverse background fostered her passion for international affairs and politics. As a Philosophy and Political Studies major at Pitzer College in Los Angeles, she is currently participating in the Bard Global and International Affairs Program in New York City, in which students intern during the day and attend evening international relations courses.

Sienna has worked for several political campaigns and international NGOs. She most recently interned with the New Sanctuary Movement in Pittsburgh, Pennsylvania, where she advocated for the legal and human rights of immigrants and asylum-seekers. Prior to that, she volunteered at a women’s crisis center for victims of domestic violence in Bukhara, Uzbekistan.

Sienna interns with Claremont City Councilman and Los Angeles Democrat of the Year Jed Leano, where she analyzes affordable housing policy and works on mental health programs. She also represents the Claremont Colleges at the Claremont City Democratic Club and guest-speaks at social clubs and schools on the importance of youth involvement in politics.