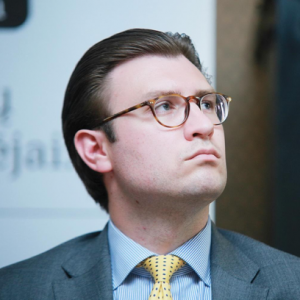 Daniel P. Vajdich is President of Yorktown Solutions, which provides strategic and political risk advisory services to institutional investors, public and private corporations, semi-sovereign companies, and sovereign governments. He is also a non-resident Senior Fellow at the Atlantic Council in Washington, D.C. Daniel was previously a senior national security adviser to the presidential campaigns of Senator Ted Cruz, Governor Scott Walker, and Governor Mitt Romney. He worked on the Senate Foreign Relations Committee where he was in charge of Europe and Eurasia and related functional issues.

Prior to his time in the Senate, Daniel was a researcher in foreign and defense policy studies at the American Enterprise Institute (AEI) and spent time as a visiting researcher at the Carnegie Center in Moscow, Russia. He holds a BA from Tufts University and an MA from The Fletcher School of Law and Diplomacy.