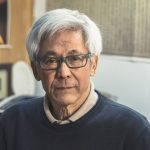 Zhang Hongtu was born into a Muslim family in China in 1943. Zhang graduated from the Central Academy of Arts and Crafts in Beijing, 1969. He has lived in the U.S. since 1982. From the mid 1980s to the mid 90s, Zhang created paintings, sculptures and mixed media installations utilizing Mao’s image to express his ideas about Communist China and the Culture Revolution.  In the last decade, Zhang‘s works have come to question complex relationships between the traditions of old China and the West today. His most recent works focus on the relationship between nature and the human condition.
Zhang has exhibited extensively, including shows at the Princeton University Art Museum, the Guangzhou Triennial, the Havana Biennial, PS1 and the New Museum in New York, the Museu Picasso in Barcelona and Kaohsiung Art Museum in Taiwan, Metropolitan Museum and Guggenheim Museum in New York.