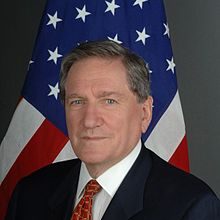 Ambassador Richard C. Holbrooke served as the U.S. Ambassador to the United Nations, where he played a central role in the development of U.S. policy toward the United Nations, the Balkans, Africa, Asia, the Middle East and humanitarian crisis issues such as AIDS.
After joining the Foreign Service in 1962, he held assignments in Vietnam, the State Department and the White House. He was also Peace Corps Director in Morocco (1970-72), Managing Editor of Foreign Policy (1972-76), and held senior positions at two Wall Street firms.