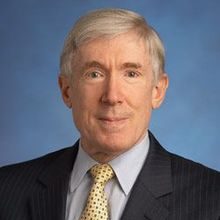 Robert D. Hormats is Vice Chairman of Goldman Sachs (International) and managing director of Goldman, Sachs & Co. Mr. Hormats served as Assistant Secretary of State for Economic and Business Affairs (1981-82), Ambassador and Deputy U.S. Trade Representative (1979-81), and Senior Deputy Assistant Secretary for Economic and Business Affairs at the Department of State (1977-79). He served as Senior Staff for NSC International Economic Affairs (1969-77) and was Senior Economic Advisor to Henry Kissinger, Brent Scowcroft and Zbigniew Brzezinski. He received the French Legion of Honor in 1982 and the Arthur Fleming Award in 1974.  Mr. Hormats has lectured at Princeton University and is a member of the Council on Foreign Relations, the board of Visitors, the Fletcher School of Law and Diplomacy, and the Dean’s Council at the John F. Kennedy School of Government.