Avril Haines is a Senior Research Scholar at Columbia University, Deputy Director of Columbia World Projects, Lecturer in Law at Columbia Law School, and a Senior Fellow at the Johns Hopkins University Applied Physics Laboratory. She additionally serves as a Member of the National Commission on Military, National, and Public Service and co-chairs the U.S. Holocaust Memorial Museum’s Simon Skjodt Center for the Prevention of Genocide’s Advisory Group. Ms. Haines serves on a number of boards and advisory groups, including the Nuclear Threat Initiative’s Bio Advisory Group, the Board of Trustees for the Vodafone Foundation, and the Refugees International Policy Advisory Council.

Prior to joining Columbia University, Ms. Haines served as Assistant to the President and Principal Deputy National Security Advisor to President Obama. She chaired the Deputies Committee, the administration’s principal forum for formulating national security and foreign policy. Before that, she served as the Deputy Director of the Central Intelligence Agency. Ms. Haines also held a number of senior legal positions in the government, including Legal Adviser to the National Security Council.

Ms. Haines received her bachelor’s degree in Physics from the University of Chicago and a law degree from Georgetown University Law Center. 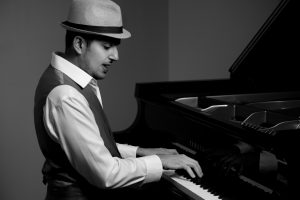 Ruslan Agababayev was born in 1976 in Baku, Azerbaijan where from an early age he showed a comprehensive musical talent. After graduating from Baku Music Academy, he continued his education in the U.S. and received his Master’s Degree in Composition from the New School University. Among his teachers were great musicians such as distinguished Professors Elmira Safarova, David Deltredici, Olga Homenchuk, Robson Yefraimov, David Loeb and Ron Carter. While in Azerbaijan, Mr. Agababayev has toured extensively throughout the former Soviet Union, Europe and U.S. where his compositions were well received. Ruslan performed and shared the stage with such legendary musicians as Toots Thielemans, Teddy Charles, Ron Carter, etc.

Among Ruslan’s compositions are pieces for symphony orchestra and smaller chamber groups, vocal music and compositions for jazz ensembles.

Ruslan’s monumental composition, Cantata “Greetings to Heydarbaba” that he wrote for Azerbaijan State Symphony Orchestra and choir capella was performed at the closing ceremony of Fourth International Mugham Festival on March 18th, 2015 in Baku, and brought him international recognition. The piece is based on the poem of legendary Azerbaijani poet Shahriyar, and consists of 6 movements. In this piece Ruslan combined classical music with Azerbaijani mugham.

On February 28, 2019, his musical “The Little Prince“ that is based on the novel of Antoine de Saint-Exupery, was premiered in Azerbaijan Academic Music Theater.

Ruslan Agababayev is a multiple award winner, including “ASCAP” (American Society of Composers Authors and Publishers) Foundation Award; “Mark Brunswick Composition Award”; and many others. He was nominated for “The Best Composition for Orchestra” nomination presented by the New School University.

Mr. Agababayev is a resident composer for Bachanalia Orchestra and was commissioned to write compositions for renowned violinist Nina Belina.

By unifying incredibly rich colors of ethnic music from all around the world with classical music, mugham and jazz, Ruslan is creating a unique atmosphere.

Thank you for supporting Network 20/20’s annual benefit! This event is critical to Network 20/20’s work. We encourage you to remember that purchasing a ticket not only provides access to a stimulating and fun evening, but will sustain and grow Network 20/20’s work on foreign policy education and people-to-people diplomacy, activities that are increasingly critical in today’s isolationist world.